How to Handle Large Snakes 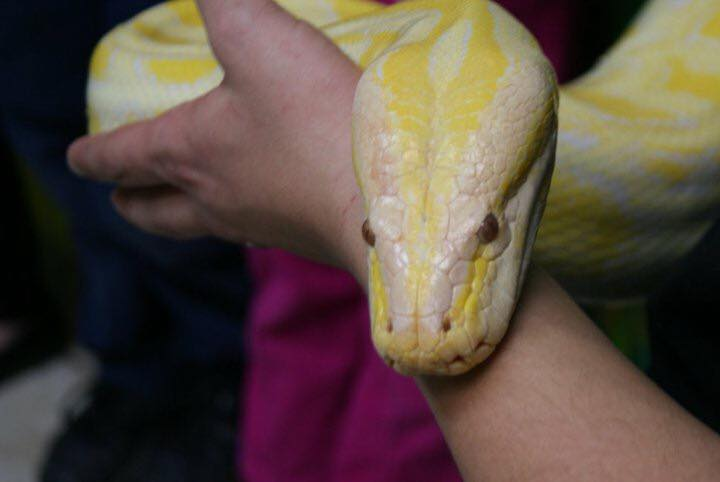 If you’re familiar with our exotic pet shop at the Tye-Dyed Iguana, then you know that for years we had a beautiful albino Burmese python mascot named Aphrodite. She came out for parties and was a popular animal with visitors.

Now, we have a new albino Burmese python named Hercules. Check him out in this video:

These large animals take a special kind of handler to keep in a home. But if you’re a big snake enthusiast and thinking about adopting one yourself, you’re going to need some special tips that are unique to bigger species.

So here is our advice on how to handle large snakes.

If you’re concerned about size

One thing to know about reptiles is that females tend to be larger than males. With Burmese pythons, for instance, a male is likely to reach a full size between 8 and 14 feet in length. Females, on the other hand, range between 13 and 18 feet on average.

That’s quite a size difference.

In addition to length, female Burmese pythons are actually much heavier than the males — more so than you would expect from the added length alone. A male averages around 120 to 130 pounds, with females reaching weights between 200 and 300 pounds. And that can make handling them more challenging.

So if you’re not sure you’re going to have enough space or the ability to care for an especially large snake, then you may want to go with a male of your preferred species. That being said, you can check to see if the specific species you are interested in is sexually dimorphic in size.

Let’s move on to our large snake handling tips…

Listen. If you’re bringing home a large snake like a Burmese python or Boa constrictor, you need to know what you’re getting into.

You cannot try to feed the snake less to prevent it from growing to its full size. First, that’s not going to work. And second, it’s going to make it much more likely that your snake will bite you.

( FYI, here’s what to do if your snake does bite you.)

Hungry snakes are way more aggressive than content snakes that are fed on a regular schedule. One signal that your snake is hungry is a flickering tongue when you approach.

#2—Wash your hands after feeding time

You already smell like prey to your pet snake. But if you leave the scent of rats or rabbits on your hands after preparing their meal, you’re going to smell even tastier — like the food they are accustomed to eating.

For safety, you should always use a handle and feed your snake from a distance.

Speaking of feeding, pop quiz: do large snakes need to eat less often or more often than smaller snakes? Find the answer in this article.

#3—Get a buddy to help with handling

Handling a large snake is not a one-person job. Even the most well-behaved of large snakes can get startled, and since many of these pets are constrictors, their instinct is to tense up.

That means you can quickly get into a dangerous situation. Many people think putting a large snake around their neck is an easy way to support their heavier weight — and it is — but it is also a quick way to get a snake constricted around your neck, which you don’t want.

So rather than trying to use vulnerable body parts to support your snake weight, team up with someone else who can help you hold the weight.

If you’d like to see how we handle larger snakes, talk to one of our team members at The Tye-Dyed Iguana, or  schedule a party with us. We include the handling of various reptile and amphibian species in our exotic pet parties.